About
Visit our Locations 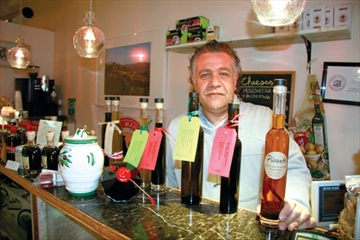 Casa Toscana was born in 2009, when three friends, 2 born and raised in Tuscany and one in Rome but "Tuscan adopted", met by chance in Niagara Region and thereafter decided to open a business and bring an authentic taste of Tuscany to Ontario.

The team is now composed by Luca, who is the CEO and director of the operations in Canada, and Toni, V.P. and Director of operations in Italy, the local link between the company and the numerous suppliers of Casa Toscana. Both of them, long time friends, are also directing the amazing tours in Tuscany and Italy.

Selecting from only the very best of what their homeland has to offer and of which it is famous for worldwide, they opened the first Tuscan Extra Virgin Olive Oil and Balsamic Bar in Canada. Today Casa Toscana Extra Virgin Olive Oil Bar and Cheese Store is a foodies paradise well known in the Niagara Region and, offering just the best gourmet products imported directly from Italy, has become a meeting point for all Tuscan and Italian food lovers.

In 2018 Casa Toscana changed location and moved from a tiny little store to a beautiful quaint old heritage house on Main Street in Grimsby, and opened their restaurant. The restaurant is now one of the most recognized and known original Italian eatery in Ontario, where dishes are cooked “al momento” (at the moment), respecting the real recipes from the Motherland.

Casa Toscana Extra Virgin Olive Oil Bar and Cheese Store owners have plans to expand their company opening new locations. Three dealers stores, which are selling their Olive Oil and balsamic,  are located in Ancaster, Toronto and St. Catharines. Their goal is to become unofficial ambassadors of the Tuscan lifestyle in Ontario and all that it embodies.